Dysfunctions of a Team

The model of five behaviours of a cohesive team was conceptualized by Patrick Lencioni. Not strategy or technology but it is teamwork that remains the ultimate competitive advantage. Genuine team work in most organisations remains elusive and fails to achieve teamwork. Creation of new or project teams is the simplest job whereas managing the stages of development of teams has become a tedious task. During these stages, teams face numerous challenges which are termed as Dysfunctions of a team.


The five Dysfunctions of a Team 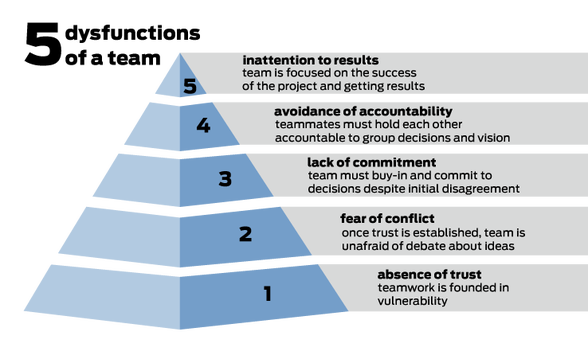 Absence of Trust - The first dysfunction is an absence of trust among team members. Team members who are not open with one another about their mistakes and weaknesses make it impossible to build a foundation of trust.
Fear of Conflict -Failure to build trust leads to the second dysfunction i.e. Fear of conflict. Teams that lack trust are incapable of engaging in unfiltered and passionate debate of ideas.
Lack of Commitment - – Lack of healthy conflict is a problem because it ensures the third dysfunction of a team Lack of commitment. Without having healthy and open debates, team members rarely, if ever, buy - in and commit to decisions.
Avoidance of Accountability -  Due to lack of real commitment and buy –in, team members develop an avoidance of accountability, the fourth dysfunction. Without committing to a clear plan, even the most focused and driven often hesitate to call their peers on actions and behaviours that seem counterproductive.
Inattention to Results - Failure to hold one another accountable creates an environment where the fifth dysfunction can thrive. Inattention to results occurs when team members put their individual needs above the collective goals of the teams. 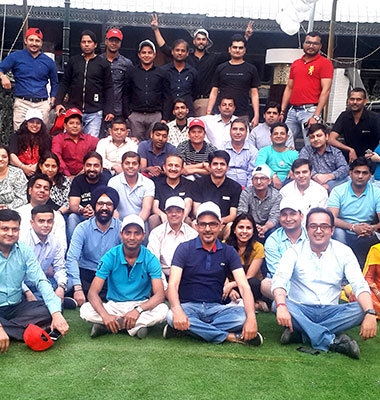